My second child teethed on and off for nearly a year before we saw any teeth arrive. It was fun! When I had my first child I honestly thought that kids babies teethed for a couple of weeks and then that was it. Yeah. I was totally wrong. Babies generally start teething at around six months, but for some it can be before four months and some kids are born with teeth.  Knowing this much, second child around I decided to do whatever I could to help my baby and me get through the pain, so these are my top ways to calm teething, both for you and your baby. 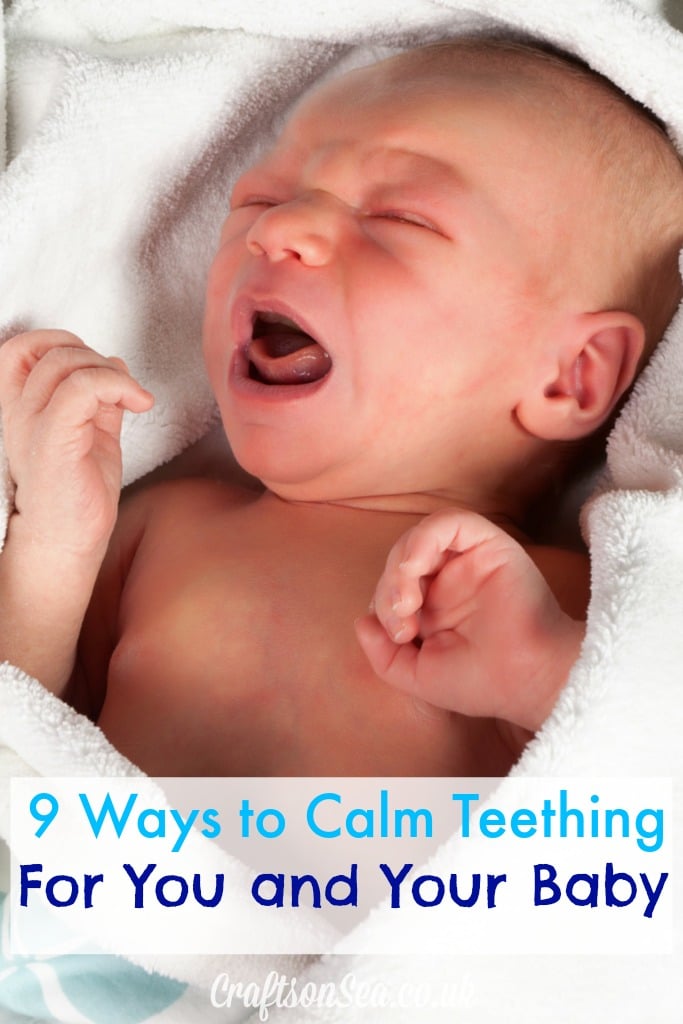 I refused to get my eldest a Sophie as I thought they were essentially an overpriced dog toy. However he was my first born and I was also under the impression then that teething only lasted a few weeks. Hmm! The baby was bought a Sophie at the first sign of the singular red cheek. In times of despair it amuses me to see her getting her head chewed.

2) Dribble Bibs. I wrote this tutorial on how to make your own a little while ago and it’s still one of the most popular pages on this site. They’re super easy to do and you also get to use a hammer, which personally I find very calming!

3) Teething gel. My toddler is obsessed with teething gel after being given it for a bad throat (advised by the chemist I hasten to add!) I’m no totally convinced on the difference it made to my daughter but it’s easy to carry round in case of an emergency and as it’s got proper medical sounding ingredients in it I kind of hope there’s been some sort of research into it.

4) Teething powders. You know how some people moan on about how they wish they’d invested in Microsoft/ the Post Office / whatever? Well that’s me and teething powders. I pretty much swore by Ashton and Parsons for my son but I’ve now been through most brands for my daughter. I *think* they work, all be it mainly in that they made me feel like I was doing something.

5) Dribble Vests. These brill looking inventions are new to me but I’ve recently seen a few reviews and it’s basically its a baby vest with an absorbent bib built into it. Cool huh?

6) Dribble Tshirts. If you have a slightly older child (sorry folks, teething lasts, like, forever.) Then the wipe clean tshirts sound ace for dribble as well as all the other lovely mucky stuff toddlers get up too!

7) Calpol. Frankly, the Bounty pack at hospital should include calpol, no one gets to six months in without desperatly needing some.

8) Teething necklaces. When I asked for advice on my blogs facebook page a while ago this was the one thing that everyone raved about. I haven’t tried them myself, but I’m a great believer in trusting the experiences of other parents.

9) Wine. For you, not the baby, obviously. On a particularly bad day you may wish to add a straw.

How have you coped with teething? Let me know any ideas you have that might help!