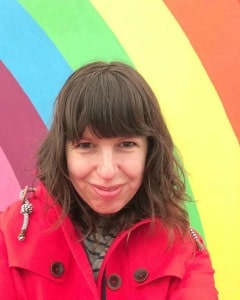 I like singing badly, embarrassing my kids with my dancing (preferably on the school run) and sitting on the beach eating ice creams. My kids like getting messy, playing with sticks and being a bit loud. My son is nine (born December 2010) and is currently deciding if he wants to be Harry Potter or a Sith Lord when he grows up, his younger sister is a crazy but cute six year old (born October 2013) who only wears dresses because she is a Queen and suffer the fool who thinks she’s *only* a princess. We live in Cornwall, England having relocated from Southend in the summer of 2016.

This Captain America Paper Plate Shield got played with for ages and even a couple of years later we’ve still made it again!

These frozen flowers are super pretty and there’s a nice video to watch if you prefer video tutorials.

Each year I round up some of the activities I’ve done with my daughter (ahem, but not my son as I didn’t think of that at the time) This one of activities for two year olds is one of my favourites.

The smallest took forever to get teeth and refused puree. Here’s 40 things she could eat before she got teeth.

Some cool things about Crafts on Sea:

It’s been featured in The Sunday Mirror, The Telegraph, Good Housekeeping, The Huffington Post and Craftseller Magazine with tutorials and some lovely stuff about this site.

If you represent an organisation you may wish to read my work with me page, you can also contact me on craftsonsea@gmail.com