This weekend we visited the Eden Project near St Austell. I’d booked it at the beginning of the summer and was really looking forward to it, then the holidays started and I started to dread it a little bit. It’s not that I don’t like the Eden Project, I went there with my husband pre-kids and had a great time, but living in Cornwall during the summer and having seen the traffic jam to the local beach reach the end of my road a mile away I was understandably a little concerned how busy it would be. We were also paying to stay in a bell tent overnight which lead me to wonder if we were basically paying rather a considerable amount of cash to be turned into human sardines with small kids to keep happy. Ouch. 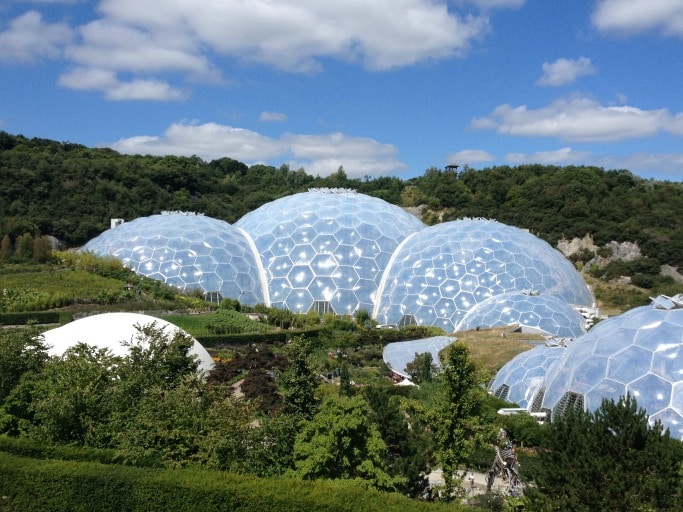 Thankfully I needn’t have worried, we went on a Sunday and it was, well if not quiet then certainly calm. We didn’t queue to get in, or for anything else and the fact that the site is huge means that the Eden Project can accommodate a huge amount of people without it getting crowded. Changeover days and the pull of the beaches means that the Eden Project tends to be quietest on weekends and sunny days. Visiting with a two year old and a five year old, the things that we found helped for us were taking the land train rather than walking as it took my toddler about 46 years to walk down to the biomes and only visiting one of the biomes this time. Kids tend not to notice when they start getting hot but crikey can they get moody with it! We just went in the jungle biome, filled our water bottles up from the taps that are dotted around and went in the cool room a few times. We also got the kids ice cream straight after we came out of there and made them sit outside until they’d cooled down and rested a bit. We took a picnic with us and there were lots of places you could sit but there are lots of places you can buy food if you want to. I had a nose at the kids lunch packs in the walkway between the biome and they were quite expensive (six pounds I think) but there was a good selection of things to choose from with pasta, wraps, veg and hummus so not just the normal jam sandwich and a bag of crisps option that you often get elsewhere. I’d also really recommend getting the bus through the car park as you want your kids to spend their energy on visiting the Eden Project, not on visiting a car park.

To make the day a bit less about travelling we also booked to stay at the YHA there. The YHA site is split into two parts with the snooze boxes in a car park area and the camping and bell tents in a field behind. The snooze boxes are your cheapest option, as I write this you can get one for a family of four in September for £55 while the bell tents are about £90 but this is the view from your bell tent.

They’re built on decking (the field is on a big hill) and you have really comfortable futons and a couple of bean bags in there. Yes, obviously you will need to walk down the hill to the toilet but there’s loads of room to play and the view, did I mention the view? The snooze boxes on the other hand? Well, I totally get why they are there, it’s non-permanent, cheap and upcycled, there’s no where there though for kids to play though so once Eden has closed for the evening you are either sat in reception at the YHA or sat in a shipping container with one tiny window. They would be great if you’d been to Eden to see a gig and just want somewhere to crash but I personally wouldn’t want to stay there with young kids. 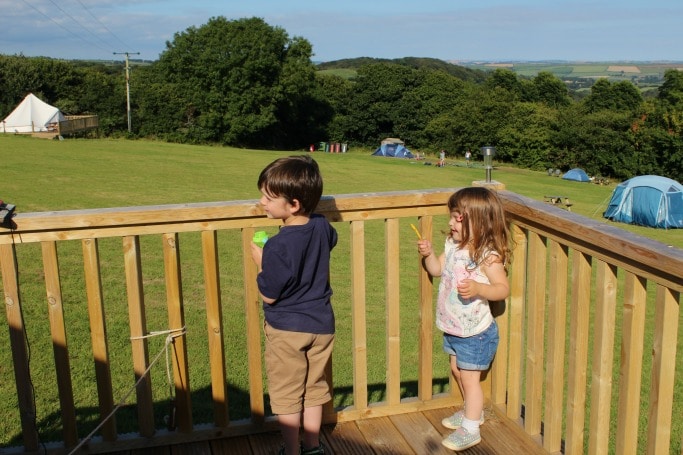 Have you got any tips for visiting the Eden Project with kids? Add them to the comments section below!

How much is an ice cream at the Eden Project £2

How much is a pint in the YHA about £4

Where’s the best place to camp at YHA Eden if you can, camp at the top of the field to make the most of the view

Do the bell tents have electricity? there’s a light in there that’s solar powered and fairy lights outside that came on at 9pm. There was also a phone charger though annoyingly I’d left the wire for my phone at home.

Can I put blaggy pictures on my Instagram account from there? I managed to get 3G in the field and there’s free wifi in the YHA reception so go for it!

Staying in a Yurt on Bodmin Moor

Previous Post: « 9 Ways to get your kids outside when they really don’t fancy it
Next Post: 8 Sanity Saving School Morning Hacks »