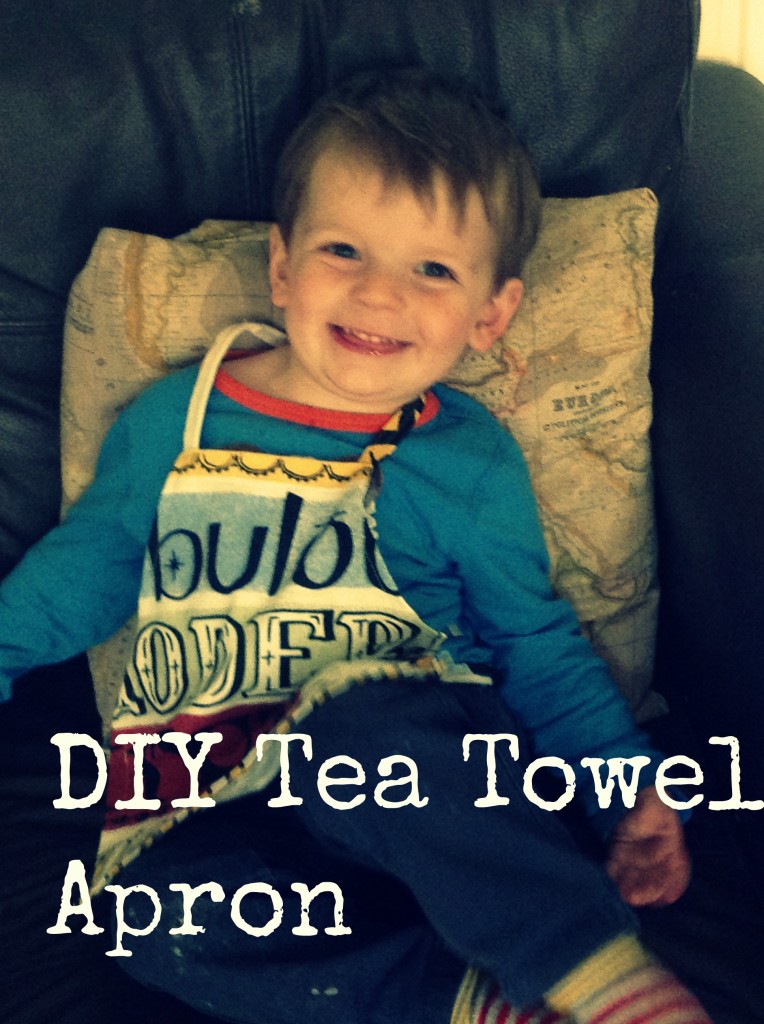 So, after an epic amount of procrastination, last night was to be the night that I did some sewing. Child in bed. Husband out. Embellished cushion covers to be made so cushions measured, template created, even the iron was at the ready. And then of course once The Toddler was in bed I realised I’d left the fabric in his room. Or somewhere like that anyway. Hmm.

Not to be deterred (it having taken weeks to get the sewing machine out after all) I then had a quick panic about what I could make, especially due to the mild no fabric issue. Then I remembered two things; one, while baking that afternoon The Toddler had got his top totally covered in cake mixture, two, while trying to be a domestic goddess earlier last week by cooking a mid week roast dinner, I had set fire to the brand new Emma Bridgewater tea towel that Mumma Craftsonsea had sent me. Normal levels of domesticity resumed there then. So rather than throw away my lovely new towel I thought I would try and up cycle it into an tea towel apron for The Toddler. The whole thing was done in less than an hour and that includes me making up a pattern, so with a bit of foresight I think this could be done in 30 minutes easily. Here’s how I did it. 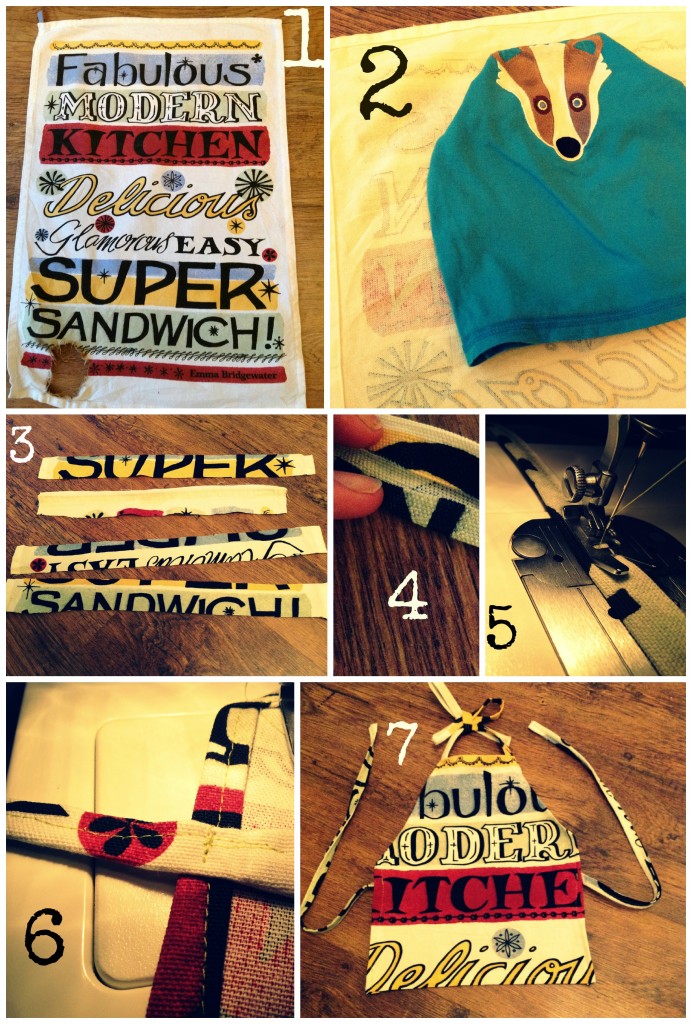 1. Choose your tea towel. Obviously I don’t recommend that you set fire to one first (she adds, for legal reasons…) If you don’t have a cute one that you want to cut up ebay is often good for nice retro style ones and I a personally love the holiday ones you can get in tourist shops.

2.Find something you can trace around to work out your child’s size. Draw your plan on the back of the tea towel in pencil allowing room for a double seem. This is obviously going to work a lot better if you can hold it up to your child to see if the fit looks right rather than waiting until they are asleep and then guessing. I also only used straight lines for the shape as I thought these would be a lot quicker to sew than rounded ones. Don’t forget that if you use a tshirt then you will want to make it a bit longer than this to help mop up all the mess!

3. Cut four strips of material from the remainder of your tea towel. These will be used to make your straps.

4. Iron the straps in half length ways and then fold the outer edges in again and iron these in. This will help create a nice clean edge. I know you hate ironing, I do too, but trust me, if you don’t iron these now you will inevitably regret it later as it makes it loads easier. Also iron in a seem to your apron, folding this over twice to help prevent fraying.

5. The sewing! Go all round the edges of your apron (you can do this in one go) and along the edges of each of your straps. Don’t forget to back stitch at each end. You may find it helps when doing the main part of the apron to snip of the inside corners of the fabric if it looks a bit bulky.

6. Attach the straps to the sides of the pron and the top. Yo want to be able to tie them in a bow behind your child’s neck and back. Go back and forwards over this a few times as it needs to withstand your child trying to pull it off when they decide they’d rather be watching Mr Tumble.

I hope you enjoy making these, do let me know if you try to make one as I’d love to see other people’s results!