I am so excited to be working with Macmillan Children’s Books to share with you this edible playdough recipe! Firstly, because Sue Hendra and Paul Linnet are two of my favourite people when it comes to childrens books. Yes, my kids love them too (Supertato is crazy popular here) but I’m normally the one reading and it’s their books I go to first as well. Secondly because to celebrate the launch of their new book Cake we’ve been making some birthday cake themed edible playdough and it smelt sooooo good! I had my daughter on hand as product tester and she had a great time with this – I hope your kids love it just as much! 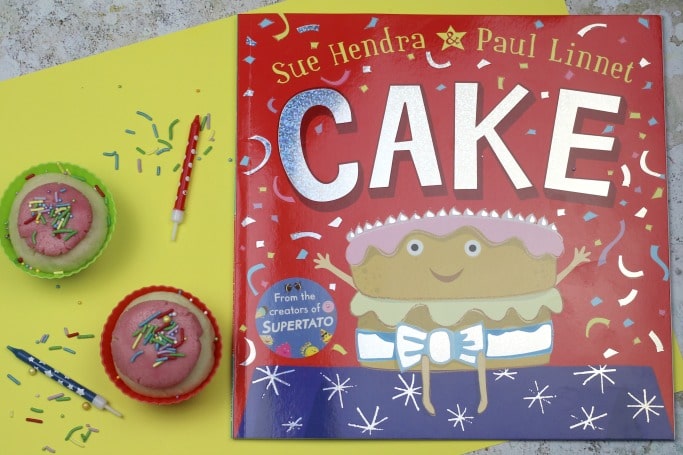 Sue Hendra is the author behind almost every book that makes my kids belly laugh at bedtime – Supertato, I Need A Wee, No-Bot (The Robot With No Bottom) and Barry The Fish With No Fingers amongst others. Paul Linnet is her partner and they’ve written and illustrated loads of their books together including their newest one Cake! Cake has been invited to a party and he’s not sure what to expect, the story follows Cake’s journey which is perfectly silly and is already a favourite with my two little cake eaters. You can find out more about Cake here and buy a copy too! 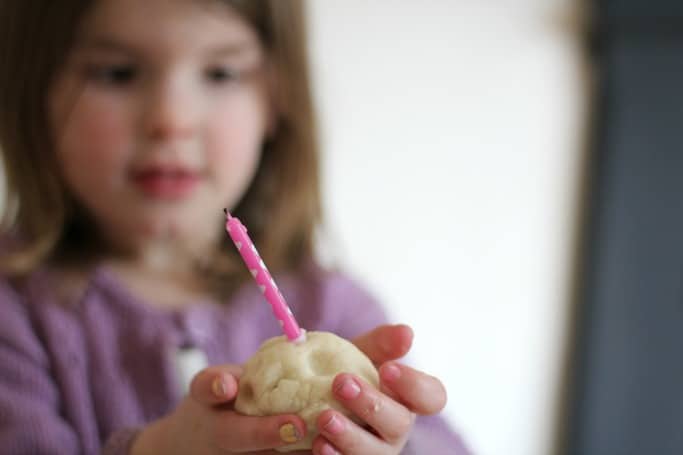 I really wanted an activity to go alongside this that would be something kids would enjoy making and doing so I went with one of my preschoolers favourite things to do – make playdough! This is playdough with a difference though as it smells just like the real thing as it’s made from cake mix. I originally made this playdough using a recipe similar to the one for my calming lavender playdough but after my husband jokingly commented that the kids would probably eat it I remembered how my daughter also used to literally run across rooms to eat homemade playdough as a toddler. Weep. It’s rammed full of salt and not edible at all so to make life easier for everyone I got my daughter involved and we spend yesterday afternoon creating a cake mix edible playdough instead. The same as with the edible slime I made I don’t tell my kids something is edible in case they think all playdough is but at least if they do eat some it’s not a big issue! 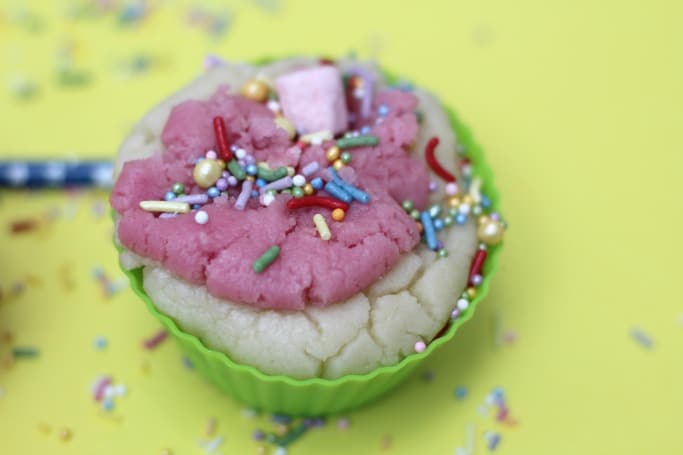 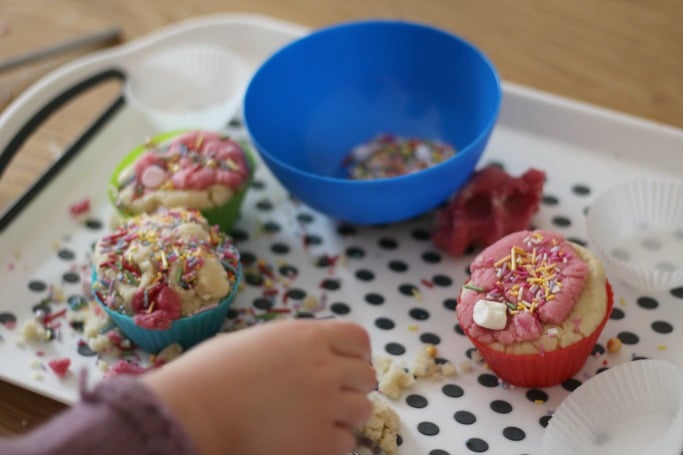 In a bowl pour in the cake mix, cream of tartar, cornflour and glycerine. I’ve added some oil but as cake mix can be quite greasy you could possibly do without this, the glycerine makes the playdough more shiny but if you don’t have any it’s optional so don’t worry! Add the water one tablespoon at a time, mixing as you go, when the ingredients start to mix together kneed the dough together until it reaches the right consistency. If your playdough is to dry try adding a little more water or oil, if it’s too wet add more cornflour.

For the pink ‘icing’ you can see on some of the cakes we took a bit of our cake mix playdough and added a few drops of pink food colouring to it – just like the pink icing that Cake has for his party! We also used silicone cupcake cases, some birthday candles, mini marshmallows and some cake sprinkles. If you do go with the sprinkles then I’d highly recommend using a tray to play on so they don’t end up all over your floor! My daughter had a blast playing with this and made me loads of awesome cakes to try out, in fact as usual I much preferred her creations to mine so the playdough cakes you can see in the long image below are her’s rather than my own attempts to make stuff look pretty, I think kids make stuff look good much more naturally.

If you like this post make sure that you bookmark this page or pin the image below so you don’t forget to make it! Fancy more Sue Hendra inspired crafts? Check out this round up of crafts and activities for Supertato.