A few weeks ago my youngest was diagnosed with asthma. She’d been coughing loads in the night until she’d vomit everywhere, it was like a poor quality flashback to her reflux days and just as stressful. Officially, I know that asthma ‘shouldn’t’ be diagnosed until two but her pump seems to be helping. One of the things that seems to set her off though is having a cold so when I was asked if I’d like to take part in a review for Snufflebabe I jumped at the chance, after all anything that has the potential to help is worth investigating! 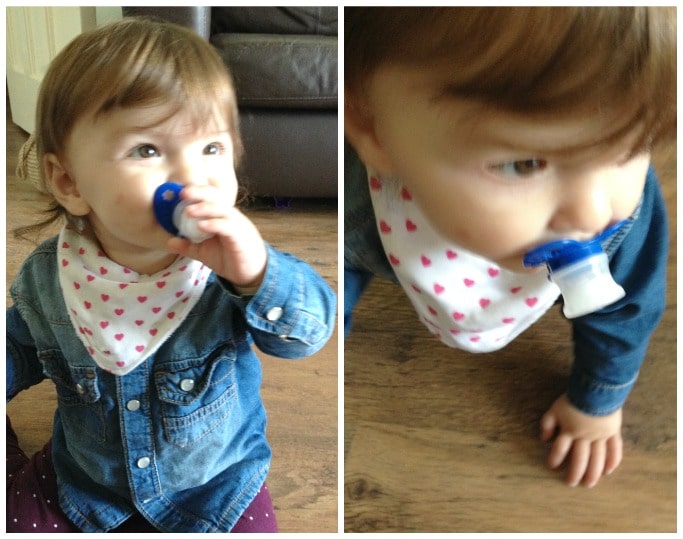 Of course this time last week I was thinking ‘oh no! My kids seem healthy! How will I test it out now?!’

Bring on the river of snot. Ugh. Having watched several episodes of SATC I don’t think I realised that actually my 30’s would be the decade that I dedicated to dealing with other people’s bodily fluids. Most days I’m certainly not rocking a pink tutu a la Carrie Bradshaw but I probably do have a bit of my kids snot or lunch somewhere on my clothes. This really wasn’t the look I was hoping for. It was with great excitement that I therefore opened the package from Snufflebabe in the hope that it would help.

First up was the Snufflebabe inhaler dummy. This is essentially a little bit of kit that looks like a dummy but which has a little chamber that you add a couple of drops of Snufflebabe nasal drops to. The smell of these helps to unblock your baby’s nose, helping them to breath easier. I really wasn’t sure if the youngest would go for this as obviously normally her dummies don’t smell, but as you can see from the pictures she was really up for it! I had hoped to get a couple of pictures of her looking mega cute and gorgeous that you could aww about but once the aspirator was in her mouth she was raring to go and play again and refused to sit still for a photo shoot! She kept her normal dummy with her but regularly swapped between the two, holding her new dummy out in her hand to show us. If you’d like to imagine Tony Benn with his pipe it’s that sort of look, but, umm… on a twelve month old girl. We also used the drops in her room during the night to help keep her nose clear which I really liked.

We were also sent the Snufflebaby Nasal Aspirator, this can be used with the drops if you need to loosen any mucus. I’m going to admit that I was not looking forward to using this. Not one bit. It’s a very clever device, you put one end in your mouth, the other end near the bottom of your babies nose, breathe in and suck the mucus out of their nose. It goes into a chamber so obviously there’s no chance of it going in your mouth, but I couldn’t get over that thought. This was no Carrie Bradshaw moment. Then today, over lunch I cracked. I saw another stream of snot creep towards her mouth, her grizzling as I tried to wipe it away, it returning two seconds later and I thought I can not take this river of slime anymore and I got the nasal aspirator out.

Whoosh! And her nose was clear. And my mouth was fine. And I wondered what on earth I’d been so worried about and why on earth hadn’t I used this with my elder son?! No, it won’t get rid of all the mucus forever, but the results lasted a lot longer than my attempts with a tissue and also got rid of the rather unslightly issue I’d had earlier of them wiping their nose on my new jumper. Win.

I know that neither of these products will change the fact that she has asthma, that’s why she has an inhailer. But being able to do something positive to help with her cold has really helped me to feel that I’m doing something practical to help her out. And if it helps me be less covered in the results of her cold too, well then it helps make my thirties feel slightly more glamorous too.

I’m working with BritMums on a project with Dentinox and Snufflebabe to test their products during cold season. All opinions are my own. To find out more about the products visit http://www.dentinox.co.uk and http://www.snufflebabe.co.uk.