So last week The Toddler bought home what I presume were salt dough decorations from play group and I was reminded that I wanted to make some for our tree this year. Actually, what I wanted to make were these gorgeous ones from Hybrid Handmade where Cari uses air drying clay and vintage lace, however I have a toddler so that wasn’t likely to happen. Instead I decided to embrace my inner Essex girl and decided we would make some super blinged up ones instead. 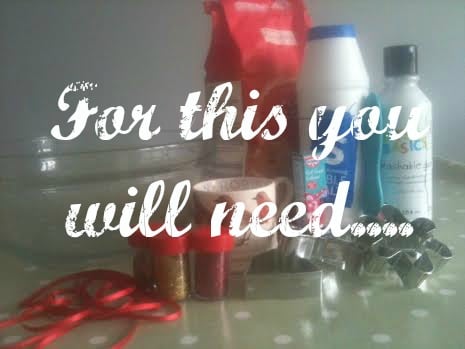 I used the ‘recipe’ from Channel 4 but in essence it is half a cup of salt, half a cup of water and a whole cup of flour. If your dough is too dry or wet adjust as needed. 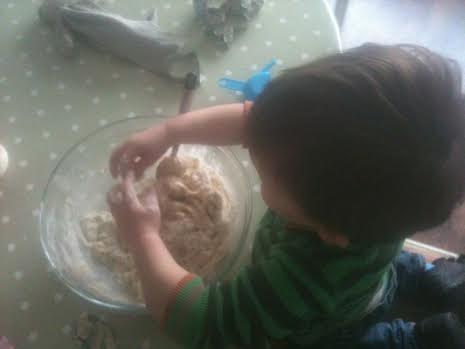 Because our tree had red decorations I wanted these to match so I added some food colouring. This is the first time I’ve used a gel colour and in no way was it as strong as the liquid ones, hence my dough is decidedly pink! There was also a moment of mild (ok, total) panic as both our hands got covered in the stuff and it all looked very Lady Macbeth. Not awful as The Toddler was due to make his stage debut a couple of days later but not great as he was going to be a shepherd in the nativity. Oops! Anyway I’m pleased to report that it washed off very easily! 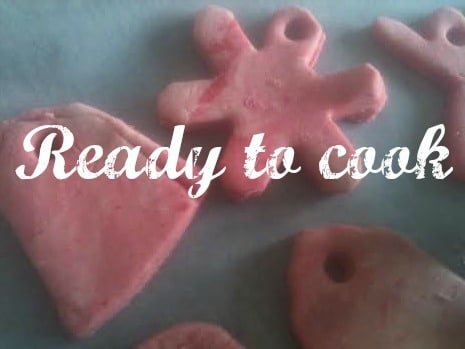 Once the shapes were made we cooked them in the oven on 100c for two hours and then left them to cool.

Then the blinging comenced! We dripped glue on the ornaments and then shook glitter on them, however The Toddler (Essex Boy, obviously) decided this wasn’t nearly bling enough so we chucked the whole pot of glitter into a bit of glue and then painted with that. Much better! And less messy to clean up too! 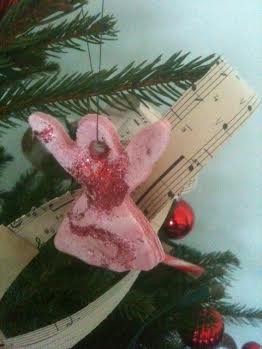 I think they look rather fab on our tree, but if you’re (tries to think of polite way of putting this…) less keen on having child made decorations on your tree then don’t forget you can always follow my instructions on turning your child’s art into a lovely vintage display. Win!