This shop has been compensated by Collective Bias, Inc. and its advertiser. All opinions are mine alone. #CollectiveBias

So during the summer my friend Gude sent me a letter, she owns an online snail mail shop The Paperdashery and so unsurprisingly it was gorgeous, all pretty stuff and beautifully written and so I wrote straight back. Except of course I didn’t. I’m dyslexic and I have the absolute worst handwriting ever known to mankind and at 37 I still can’t hold a pen properly. Add to that the fact that the thought of making stuff pretty has a tendency to bring me out in a panic and the letter just didn’t happen. However with today being National Handwriting Day I was challenged to face my fears about my terrible penmanship and write to the people I owed mail too and actually with a few little things and some simple snail mail ideas to help it wasn’t that bad, maybe even fun?! 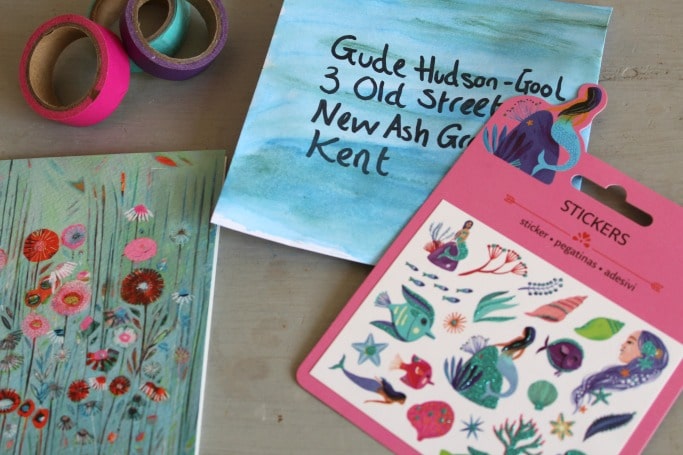 So first up was finding something to write in. The thought of a big blank piece of A4 and only me and a biro brought me out in a cold sweat so I decided the best thing to do was buy some sweet notecards and some bits to help me decorate the envelopes and make them more cheerful.

I found the notecards, Djeco Sous La Mer stickers and Djeco kawaii stamps in Spencer Thorn in Bude which is a really nice book shop. The notecards were towards the back of the store and the Djeco goodies were on a stand in the middle of the shop. 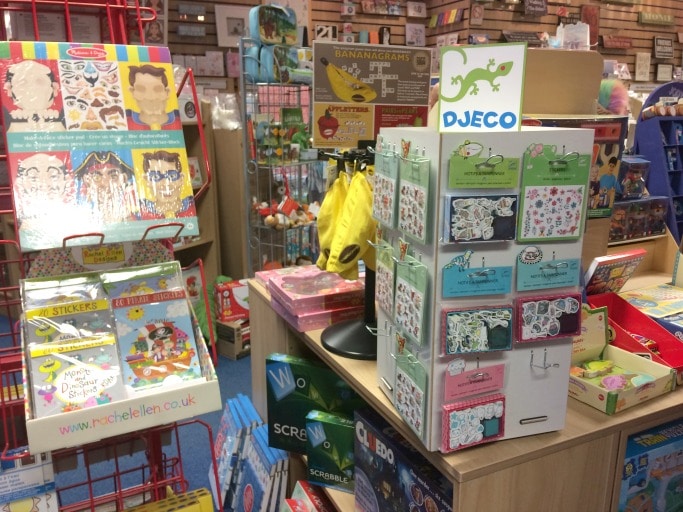 For my letter to Gude I chose to decorate the envelope with a mermaid theme. First I added some water to some blue and green Annie Sloan paints and then I used these to make a watery background. All I had to do once it was dried was add the Djeco Sous La Mer stickers and write the address on in my very best, slowest handwriting. I’m going to be honest and say I still found the writing to be a struggle but slowing down and having a pretty envelope made it seem much better – who’s going to worry about my letting when there’s a sparkly mermaid to look at? 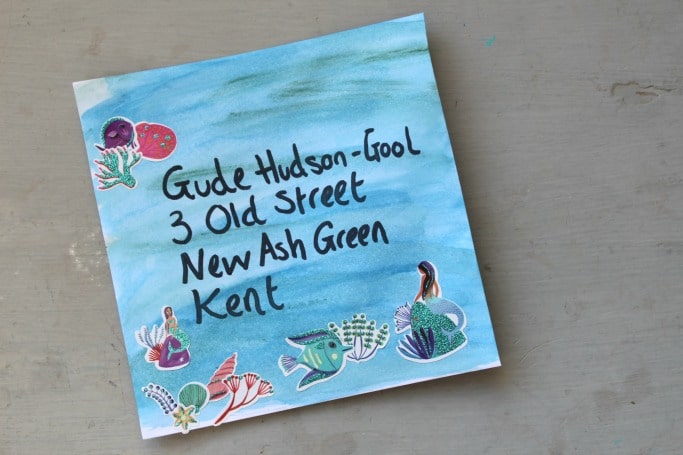 Writing the notecards seemed a lot easier and quicker than I’d worried about so with my new found bravery I thought I would face up to the other bits of snail mail I owed people. Next up was my friend Tanis, this is probably my favourite of all the designs and it was the easiest and quickest to do too. I simple wrote the address on the envelope and then used the Djeco kawaii stamps to decorate all around it. Super cute, huh? 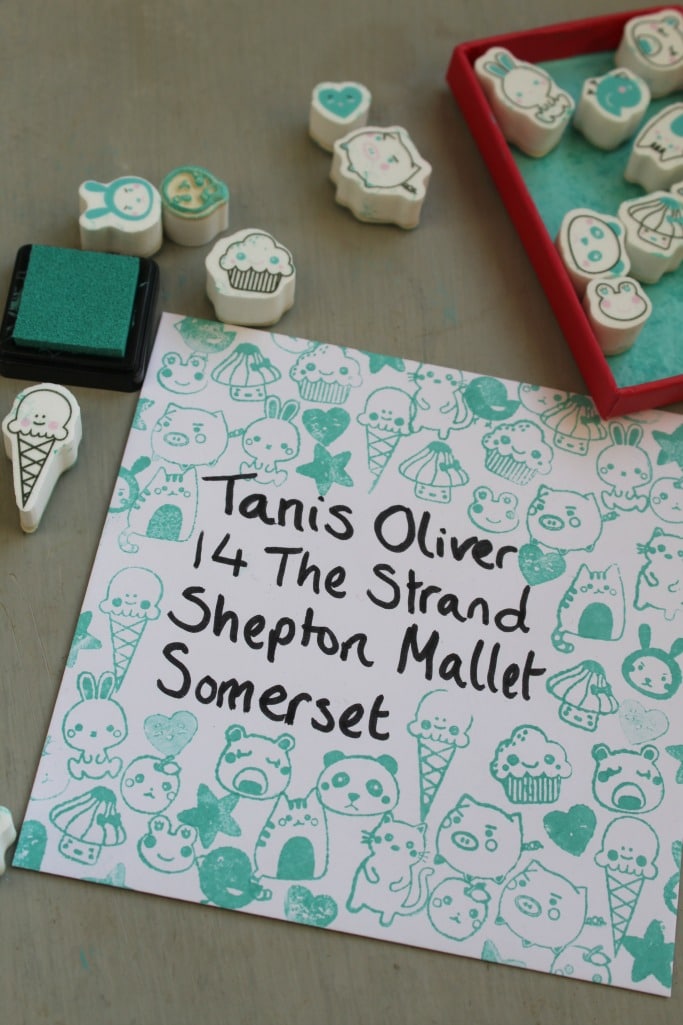 My next snail mail idea used the notecards that I had bought from Spencer Thorn but I also used an old vintage map I’d bought in a charity shop a couple of years back. I knew it would come in handy one day! I wrapped the map around the envelope, cutting it to fit properly around the envelope flap and then stuck the address on top. I love the idea of this little map making it’s way back to Essex where I originally bought it! 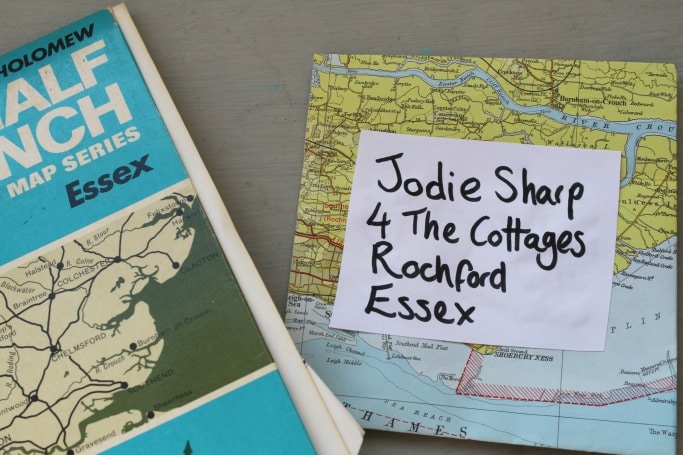 The last of my snail mail ideas came about when I was sat with my kids while they did some colouring, why not add some colouring to one of the envelopes? My drawing skills fill me with almost as much fear as my handwriting ones but pretty much anyone can draw a cloud, right? The sun in the corner makes it the perfect place to add the stamp too. 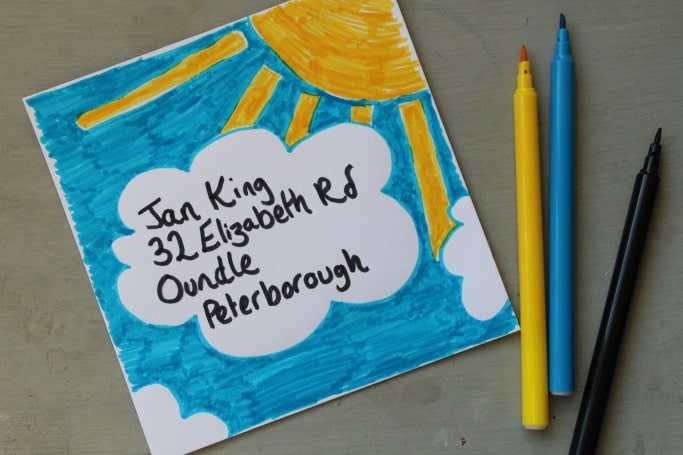 I’m hoping the dose of pretty on the outside and the pretty notecards inside will help my friends excuse my handwriting, they’ll certainly be able to see that a lot of thought went into their post anyway! And making my post look cute finally took the pressure off my letter writing duties, hopefully I’ll start being a bit better at keeping in touch from here on too.