Having moaned about stuff continuously last week I read Polly’s Gratitude List at the weekend and thought it was a lovely idea, so instead of the moans, here’s ten things I’m grateful for which I’ll be linking up to her link party. 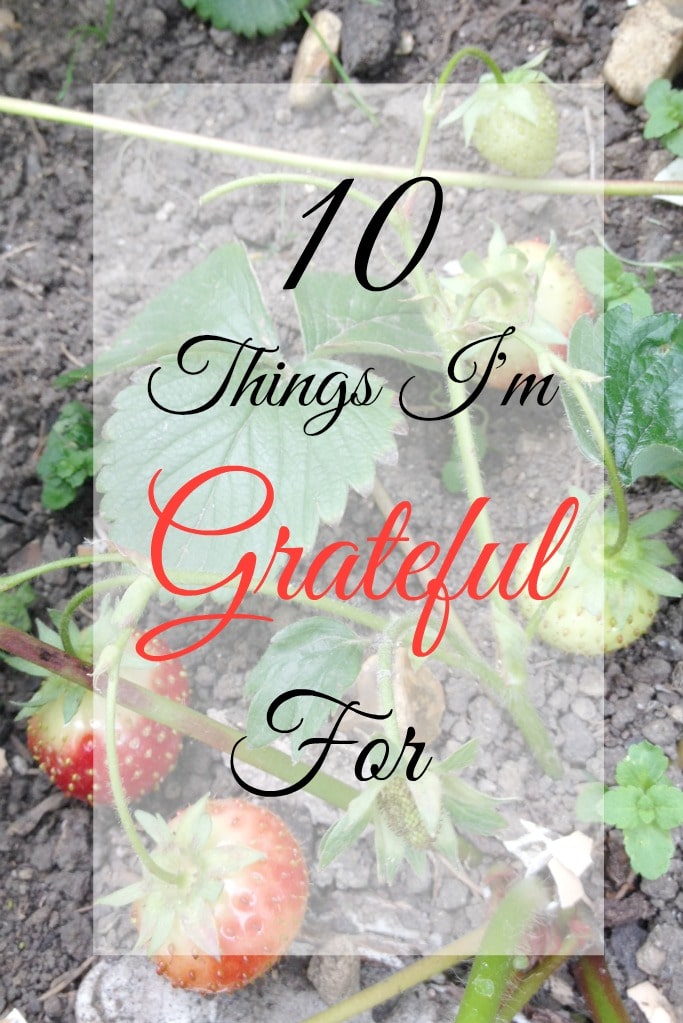 1) The baby was sick all over me and I had to change all my clothes. Now I know that sounds like a bad thing (and obviously I don’t want my kids to be ill) but it made me recognise that it’s now a few months since I’ve had to do that. If you’ve had a baby that suffers from reflux then you’ll be used to being covered in sick several times a day and the many, many outfit changes that come with that. You don’t think it’s worth putting your coat in the dry cleaners as it will only get soaked again ten minutes later. My jacket is going to the dry cleaners tomorrow. I’m so happy to be through the reflux stage.

2) The toddler eating home grown strawberries. I’ve never managed to grow any myself but I asked on the Crafts on Sea Facebook page for advice and we surrounded the plants in broken egg shells. The picture above is of the ones he’s grown.He’s now picking some everyday, needless to say I have had none!

3) Date night. With the exception of a work do, this weekend me and the husband had our first night out for a year.

4) Getting a new step-sister. My mum got married in the week, we had to cancel our plans to go last minute as the youngest was too ill but I have now gained a new step-sister which is pretty exciting! A long and complicated story means I haven’t met her yet but I’ve seen a picture and she looks really nice. I think only the children of divorced parents know the excitement of new grown up siblings!

5) Picnics. Not going to the wedding meant an unplanned family day, we went for a picnic in the woods which was glorious.

6) Getting paid to craft. Recently I’ve had to neglect this blog a tiny bit as I had a bit of work writing some craft posts for the Tesco Living website. Happy is the woman who is paid to do some sewing.

7) Seeing the chickens in my friends garden.

8) Making a lunch that my son ate all of. Yes that is a minor miracle. Was so pleased I’ll probably blog it later this week!

9) Seeing my bubbas making each other giggle.

10) My fellow Tuesday Tutorials hosts, who are brilliant, help me out with loads and are a constant source of advice and inspiration. Love them ladies!

What are you greatful for?